The Baby Formula Shortage: What Can Parents Do? Key Questions Answered 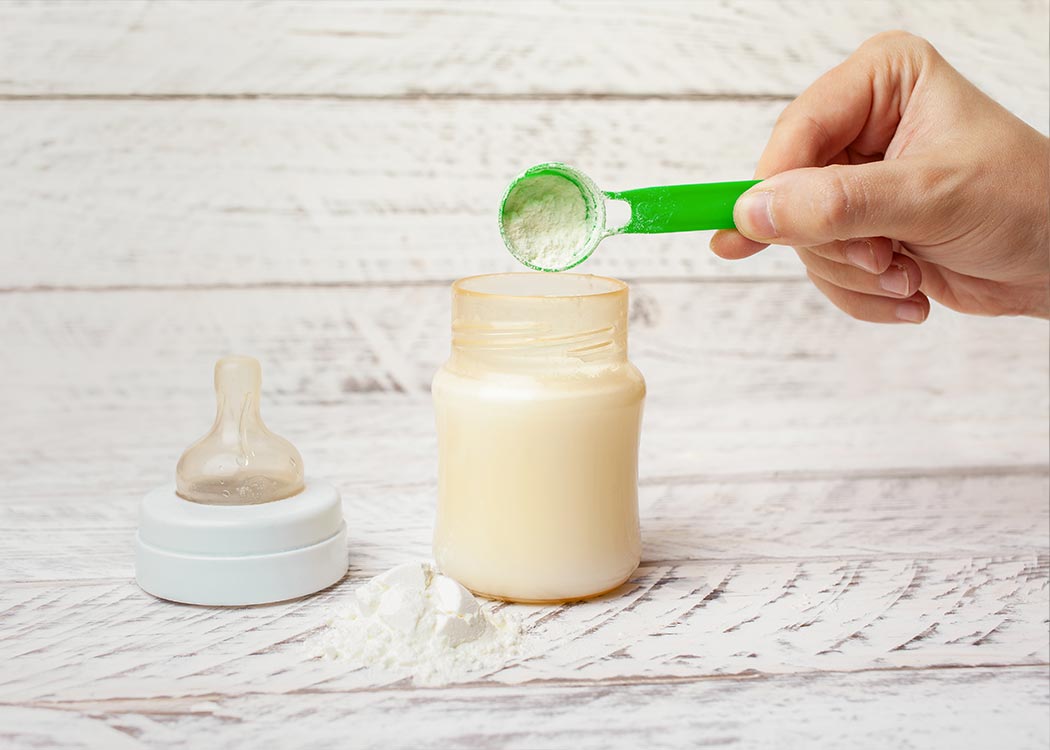 The prolonged baby formula shortage is now a full-blown crisis, sending parents deeper into a frenzy, and for a good reason. Unlike toilet paper and other recent shortages, formula is essential for the nutrition, growth and brain development of millions of babies and infants nationwide. And with rising inflation rates and cost of living, it could not have come at a worse time.

And while there was promising news this week with the FDA approving the reopening of a key manufacturing plant and ramping up production, experts (optimistically) predict another two months for supply to get back on store shelves, with the impact of the shortage likely lingering well beyond that for families here in New Hampshire and across the country.

We realize there are a lot of questions and confusion around the topic: Is it safe to make formula at home? Can I switch formula? What about ordering from Amazon Canada?

We answer these and other key questions:

Why is there a shortage of baby formula?

In February, Abbott Nutrition issued a voluntary recall on its popular Similac, Alimentum and EleCare formula brands after four babies became sick from a bacterial infection, with two passing away. This resulted in the halting of production at Abbott’s Sturgis, Michigan plant which produces the majority of the brand’s formula.

Abbott has an approximately 40 percent market share of powdered infant formula in the United States, so this sent shockwaves into the supply chain, resulting in widespread shortages in grocery stores, box stores and other retailers, as well as online outlets. More than three months later, the supply continues to dwindle even more. Data this week showed the national out-of-stock rate hit a high of 43 percent the first week of May, up three percent from the last week of April (compared with a normal average of 10 percent).

On May 16, the FDA announced production at Abbott’s Sturgis facility would resume within two weeks pending approval, and at that point, it will likely take approximately two months for adequate stock to hit shelves, with repercussions likely lasting beyond that.

Why is it such a crisis for parents?

Simple: There isn’t nearly enough formula to meet the demand today. Most babies rely on formula at one point in their life, whether exclusively or supplemented with breastfeeding. According to the CDC, nearly one in five babies receive formula within the first few days of their lives. By three months, more than half depend on at least some amount of formula either alone or as a supplement.

For these children, especially those ages six months and younger, formula is vital to their health and development, offering essential nutrients for their body growth and brain development. Without it, they face the risk of malnutrition and potential adverse health effects.

Parents are doing everything they can to provide for their children. Most have driven from store to store to store and beyond with no luck. Others have had no other choice but to purchase online from individuals, many of whom hoarded supplies and are selling for a profit, at the cost of heavily marked-up prices. Others have been taken advantage of through price gouging, counterfeit products or scams where they paid for formula but didn’t receive any.

While it impacts all families whose child requires formula, the crisis is known to be more profound for low-income families who can’t afford to pay premium prices, as well as those whose children require specialized formula. The CDC reports that families living in poverty are more likely to supplement their child’s diet with formula in the first three months of their lives.

That is a dangerous and false assumption. Formula isn’t always a choice – it’s often a necessity. For many babies, formula is their most viable source of nutrition. While most mothers intend to breastfeed, only 40% of infants under six months of age are exclusively breastfed. Nearly 20% of breastfed infants were supplemented with infant formula before two days of age. 31% were supplemented before three months.

Can I just feed a baby regular milk instead?

No. A baby’s brain is continuously growing during the first year of their life. Giving them regular milk, especially when they are not used to it, can lead to developmental challenges and other severe health risks. Cow’s milk is also one of the most common allergies in children.

Can I switch to other formulas that are more readily available?

For most children, this is a safe option; however, it all depends on the child and specific dietary needs. For some, doing this can pose a risk. You are highly encouraged to consult your pediatrician or a medical professional before switching.

Can I use expired formula?

No. The nutritional value of formula deteriorates after the sell-by date. Bacteria and mold can frequently grow in expired formula, and can increase the risk of foodborne illness, poisoning or other harmful consequences.

Can I just dilute or water down formula to preserve supply?

The American Academy of Pediatrics urges that babies under six months should not have water or other liquids unless recommended by a medical professional. Subjecting an infant to too much water can reduce the amount of nutrients and slow growth and development. It can also place them at risk of dangerous low sodium levels and water intoxication. This potentially deadly condition can also result in vision issues, nausea and vomiting, irregular breathing and other troubling symptoms.

Can I make formula at home?

Attempting to make your own formula is also highly discouraged by medical professionals, including the FDA and American Academy of Pediatrics. Both warn that homemade formula can be unsanitary, lack essential nutrients and pose serious health risks. No matter how good the homemade recipe may appear online, it may be dangerous for your child.

Is it true you can order formula from Amazon Canada?

There has been a lot of social media chatter that parents are able to get formula through Amazon by changing their geography settings to Canada. While some have shared that they were successful in doing so (purchasing them at a substantially higher price), it appears this theory might not be true.

Where can I find baby formula?

If you lack a proper supply of formula, you are encouraged to contact your pediatrician. If you are attempting to purchase through retailers, we suggest that you call the stores ahead of time to save yourself from adding unnecessary time and mileage on your car. Online networks like Facebook have online forums and groups where community members share updates with local availability. The Special Supplemental Nutrition Program for Women, Infants and Children (WIC) can also be a helpful resource, as well as this fact sheet from the U.S. Department of Health & Human Services.

If you find supply online, be diligent and make sure that you purchase from a verified retailer. You can vet them by checking reviews or even calling any phone numbers listed. You are not encouraged to buy formula from overseas sources, which have different safety regulations and often use varying ingredients. There have been cases of infants either becoming sick or dying from tainted products manufactured outside the United States.

The Catholic Charities NH Our Place pregnancy and parenting education program is offering free formula, on an availability basis, to families enrolled in its Manchester and Nashua-based programs. Our Community Services program also offers financial literacy training, case management and community referrals. for families who may be financial struggling as a result of this crisis.

Where can I donate baby formula?

Any unopened formula within its expiration date can be donated. There are many nonprofits across New Hampshire that may accept donations, including the Our Place program in Manchester and Nashua and the New Generation program in Greenland.

On June 7-8, as part of NH Gives, Catholic Charities NH will be raising funds to provide basic needs – such as formula – for families in the Our Place program who live on low incomes and are experiencing difficulties accessing essentials for their children through normal means.

For parents who are impacted, we know this is a difficult time and we understand the frustration and heartbreak over this. While it may not be easy, know that better days are ahead – and you are doing a great job being the best possible parent you can be.

Disclaimer: Our Place is not a medical-based program and the information and guidance above are through vetted health and medical organizations.

Karen Munsell is supervisor of the Our Place program, which equip families with pregnancy, parenting and life skills, and the conﬁdence to create nurturing and safe environments for their children while working towards stability.