New Generation: Helping Jolie Get Back on Her Feet 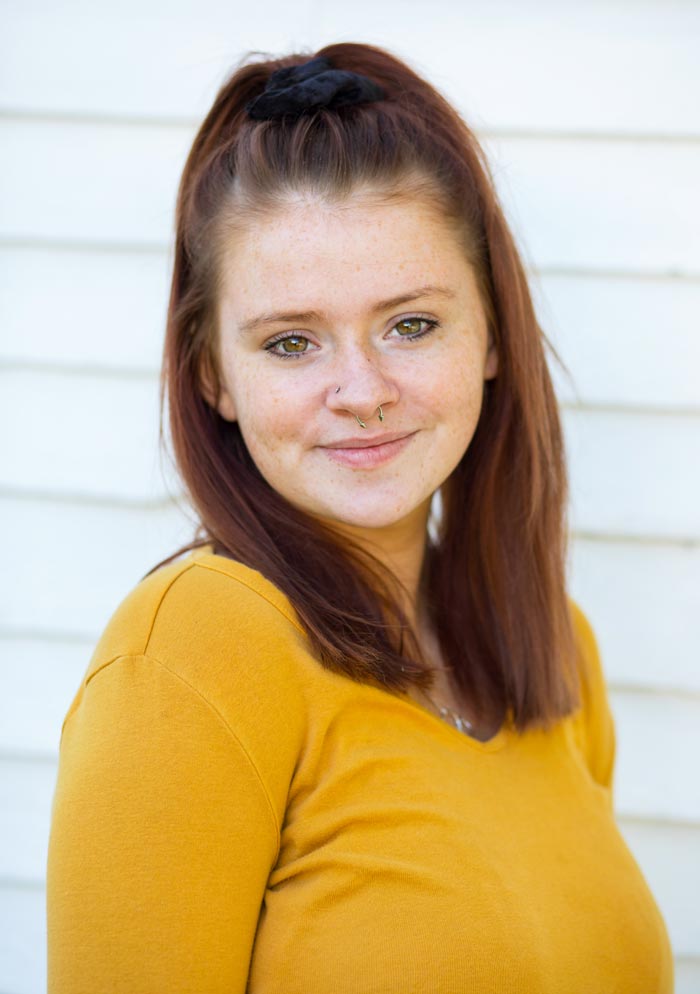 It was a brisk early Friday fall morning as Jolie walked down Portsmouth Ave in Greenland, NH, with a friend, smiling and laughing as most 19-year-olds would.

For Jolie, this was a moment she thought she would never see, especially after the many twists, turns and turmoil over the past two years. But as the leaves were changing around her, Jolie’s life was changing too – for the better.

On that morning, Jolie was visiting New Generation, the newest addition to the Catholic Charities NH family. Five months prior, she was a resident of the emergency shelter and transitional living program for pregnant and single mothers – and their children – struggling with homelessness, abuse and other adverse life experiences. Like other residents, Jolie was looking to pick up the broken pieces of her life and create a secure and stable future for herself and her son Bentley.

And thanks to New Generation and donor support, that’s exactly what she’s doing now.

At 17, Jolie was living with her mom, still in high school and got pregnant. Her son, Bentley, was then born. Now a year and four months, Jolie glowingly calls the funny, energetic and cute boy “my little best friend.”

Jolie admits she and her mother didn’t have a perfect relationship. While they are very much alike, they argued often and both came to realize that living together wasn’t in their best interests, nor was it a healthy environment for Bentley. One day, it hit a boiling point. Her mother asked her to leave. Jolie checked into a local emergency shelter. For her, it was the first place that would take her, but the shelter didn’t allow children, so Bentley had to stay with his dad.

She recalls the dark place she was in. “I was an eighteen-year-old with not much hope in myself. I knew I needed to reach out for help. While I wasn’t thrilled at the thought of being homeless, you have to do what’s best for you and your kids.”

Jolie was at the shelter for three weeks, but it wasn’t clean. There were bed bugs. She didn’t feel the staff was supportive. And she missed Bentley. “It really hurt to be without him,” she shared.

Support young mothers and children like Jolie and Bentley

Like Jolie, one of her other housemates at the shelter wanted to move on. The friend’s social worker contacted New Generation, which provides a family-oriented shelter, transitional housing, aftercare services and a variety of support programs helping mothers build self-sufficient futures with stable housing and jobs.

There was an open bed for both women. The next day, in late February 2021, Jolie moved into New Generation with Bentley.

When they first walked in the door, there was a renewed sense of hope for Jolie.

“From the first day, it was clear the staff at New Generation was so supportive,” Jolie recalls. “They were kind, more involved in the program, and more helpful. It seemed way better than any other shelter I’ve been.”

Jolie and Bentley settled in nicely at New Generation. They had 24/7 support and access to basic necessities. Their day would usually start at 7 a.m., when they would go for a walk and play outside. Jolie then took part in a wide range of support services with the other residents, including parenting counseling, life-skills coaching and financial counseling. 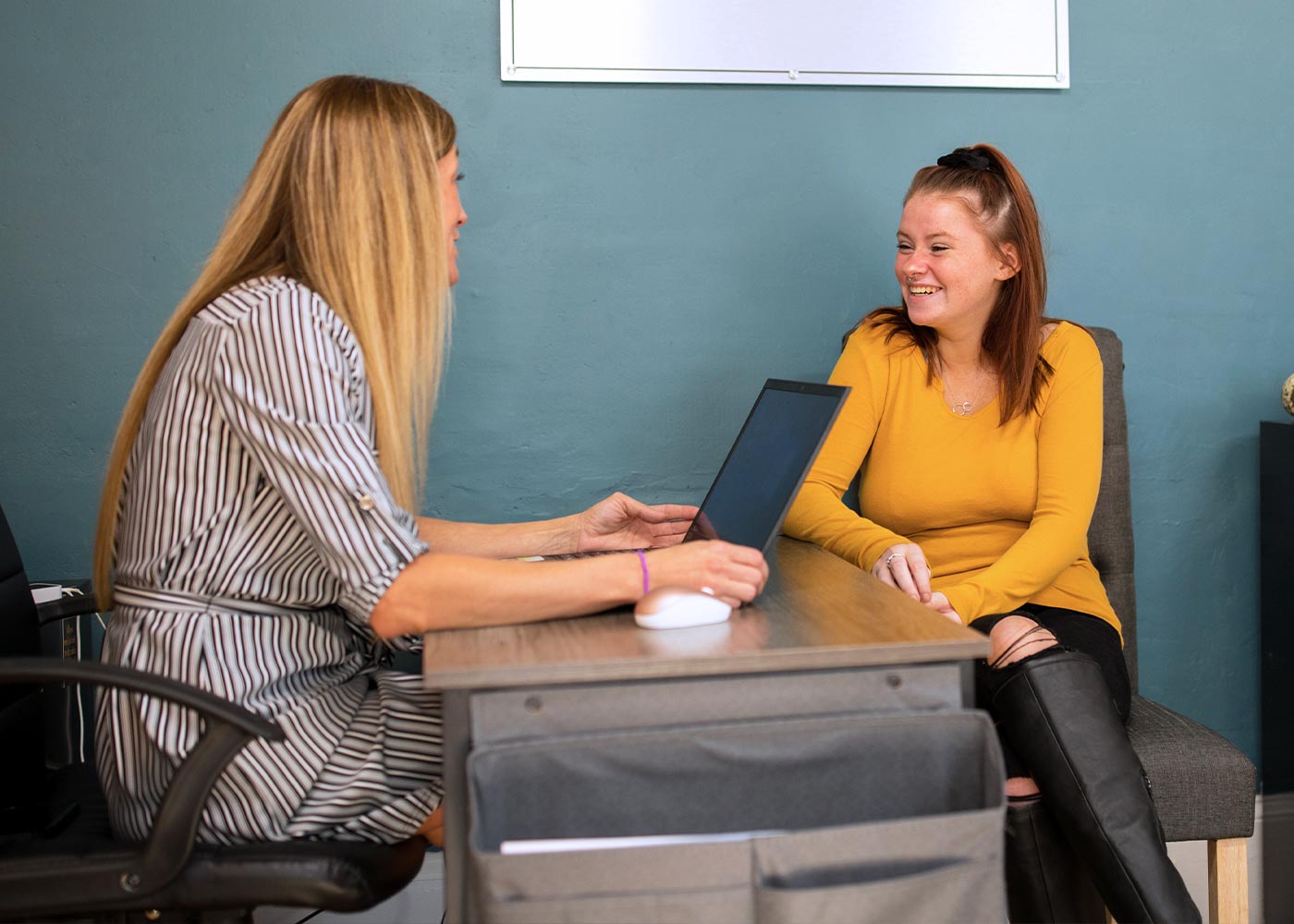 She also worked with Brandy, the program’s family services manager, to develop a series of goals designed to move her life forward. “They really push you to set your own goals, and go above and beyond and be your best self, not only for you, but for your child too,” Jolie said.

“From the first moment I met her, it was clear that Jolie had a strong motivation to conquer every goal that we set,” said Brandy.” She was eager to do the hard work that it takes to become self-sufficient.”

Jolie’s first goal was getting a job. She applied for one at a local coffee shop and was hired on the spot. She worked three days a week while Bentley was with his dad. Jolie fondly recalls how the New Generation staff would always wish her a good day at work when she left in the morning. For her, “that’s when I truly knew that I was growing up and I got this.”

Then there was the Section 8 housing voucher and, for her and Bentley, their ticket to eventually transition into a place of their own. New Generation staff guided her through the application process and helped gather required legal documents. She was at work when she found out that it was accepted in what she calls a very emotional moment. “I wouldn’t have gotten it if it wasn’t for New Generation,” she says. 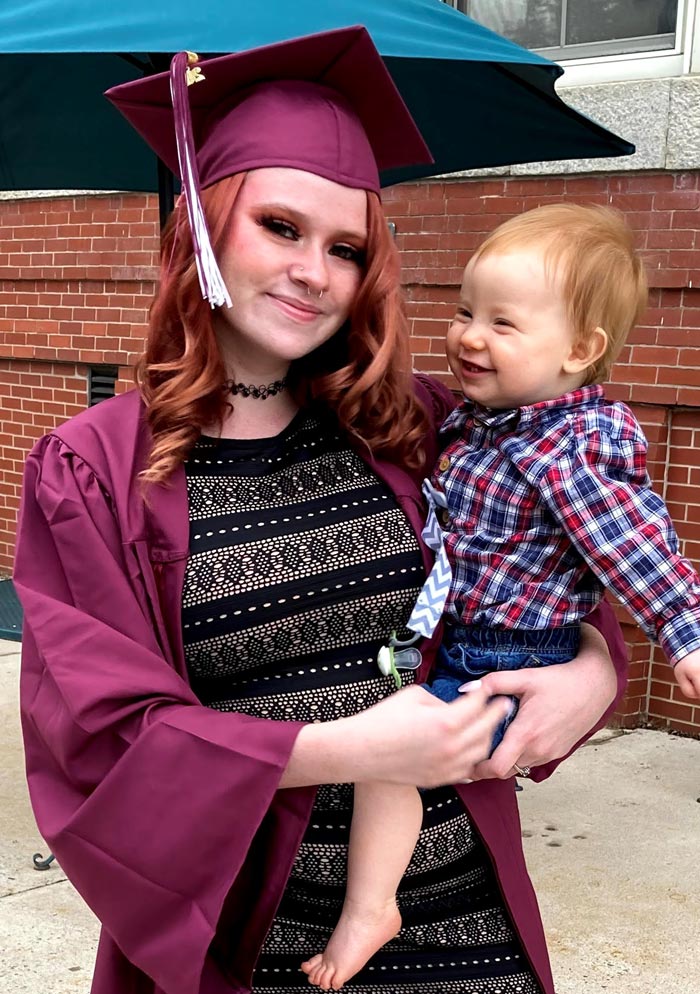 In June, Jolie completed another special goal – she finished her GED classes and graduated high school. Brandy and other New Generation staff were alongside her, helping her with her hair and getting Bentley ready for the big day. “They showed up as my second family, and it was then where I recognized that, no matter what, they will always be there for me.”

“Jolie always showed up ready to go,” added Brandy. “She utilized all the resources that were available and asked for help when needed. She never got complacent. She always strived for providing a better life for her and Bentley.”

July 23, 2021 marked another big milestone. Six days before her 19th birthday and five months since first arriving at New Generation, the two moved out of New Generation and into an apartment they can proudly call their own. Jolie and Bentley weren’t alone either. Her sisters, best friend and her mother– who she had reconciled with – were there to cheer her on.

“It hit me then – I was going out into the world for the first time. Yes, it was a bit nerve-wracking and overwhelming, but I felt so proud of myself and what I accomplished to get to this point. It was such an amazing feeling,” she said.

Jolie is still very involved with New Generation as part of its aftercare program, which provides ongoing support services to prevent the recurrence of homelessness, foster education and career development connections, and further facilitate paths to self-sufficiency. Jolie checks in weekly with Brianna, the aftercare coordinator. They are currently working together on her next goal to get her driver’s license.

Jolie also credits Brianna for helping her adjust from a shelter to permanent housing. “The transition from community living, where there can be a lot of people, to a calm environment is a big change,” said Jolie. “You don’t have as many people to talk to, and you aren’t with others all the time.”

While she’s able to get by for the most part, Jolie still requires assistance around items like toilet paper, cleaning supplies or paper towels – or diapers and wipes for Bentley. And New Generation is there to help. “Many people don’t have that support in their lives, or others to count on,” she said “I recognize how fortunate I am.”

If it wasn’t for New Generation, Jolie admits she might probably still be homeless. “Coming in, I didn’t believe in myself or have a great head on my shoulders,” she said. “When you’re my age, you don’t really think about being independent, but when you have a baby, you need to stop relying on others.” 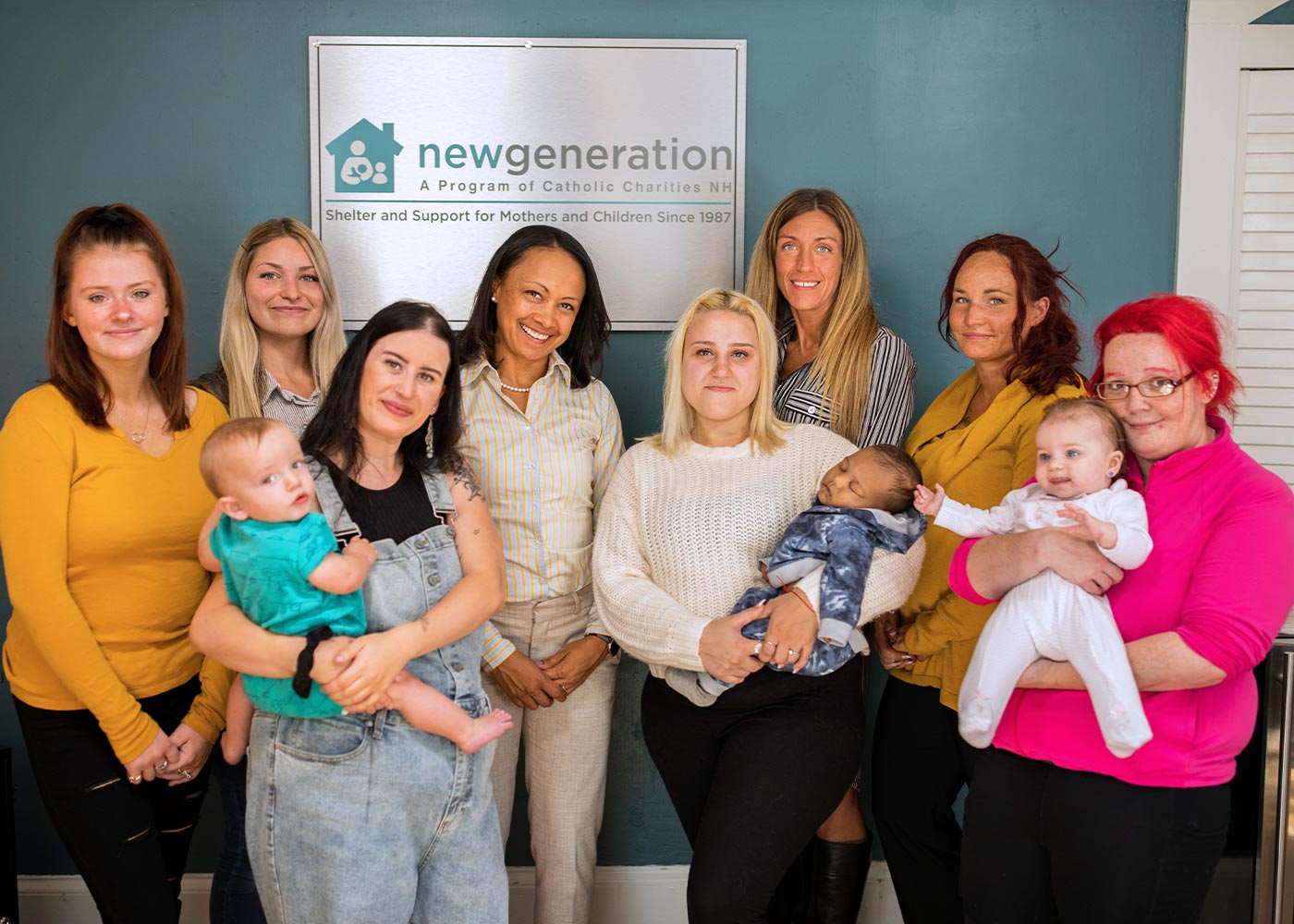 “With New Generation, I had a shoulder to cry on, people who truly cared about me and wanted me to succeed with my son. They helped me see the bigger picture that I could be a responsible adult that others can look up to and say, ‘wow, she’s only 19, how did she do that?!'”

“The accomplishments that Jolie made in such a short amount of time were incredible,” said Elsy Cipriani, executive director of New Generation. “Here’s a young woman who had a baby, graduated high school, got a job and is now on her own. She has this confidence about her that is so inspirational.”

Jolie’s advice for other pregnant or single mothers who face similar struggles that she did? “Even if things may seem bad, know that it’s okay to ask for help, not only for yourself but for your child too.” she shared. “Embrace the help you are receiving. Like I did, come into it with the mindset that you can do it and remain positive about everything because if you aren’t, you aren’t going to be as successful as you can be.”

“You are Giving us a Safe Place to Live”

Jolie is grateful for the donors whose support makes the assistance she and countless others have received at New Generation possible. “Thank you so much – you have helped so many mothers and children, and we are very appreciative of what you have given us. Rather than sleeping outside or in unsafe places, you are helping to give us a safe place to live with our babies, provide food, shelter and warmth, and an opportunity to simply be happy. New Generation is not just a shelter – it’s an amazing program that helps you become a better mother.”

While she knows there will be challenges ahead, Jolie remains committed to her progress and optimistic for the future. “They showed me that I can do anything I put my mind to.”

And as for those goals, Jolie has a long-term one in mind. One day, she wants to work in case management – at New Generation.

“I want to help empower other mothers to ask for help – and guide them in the way New Generation did for me.”

Click here to support young families like Jolie’s, directly helping them move away from homelessness to more stable, secure lives. 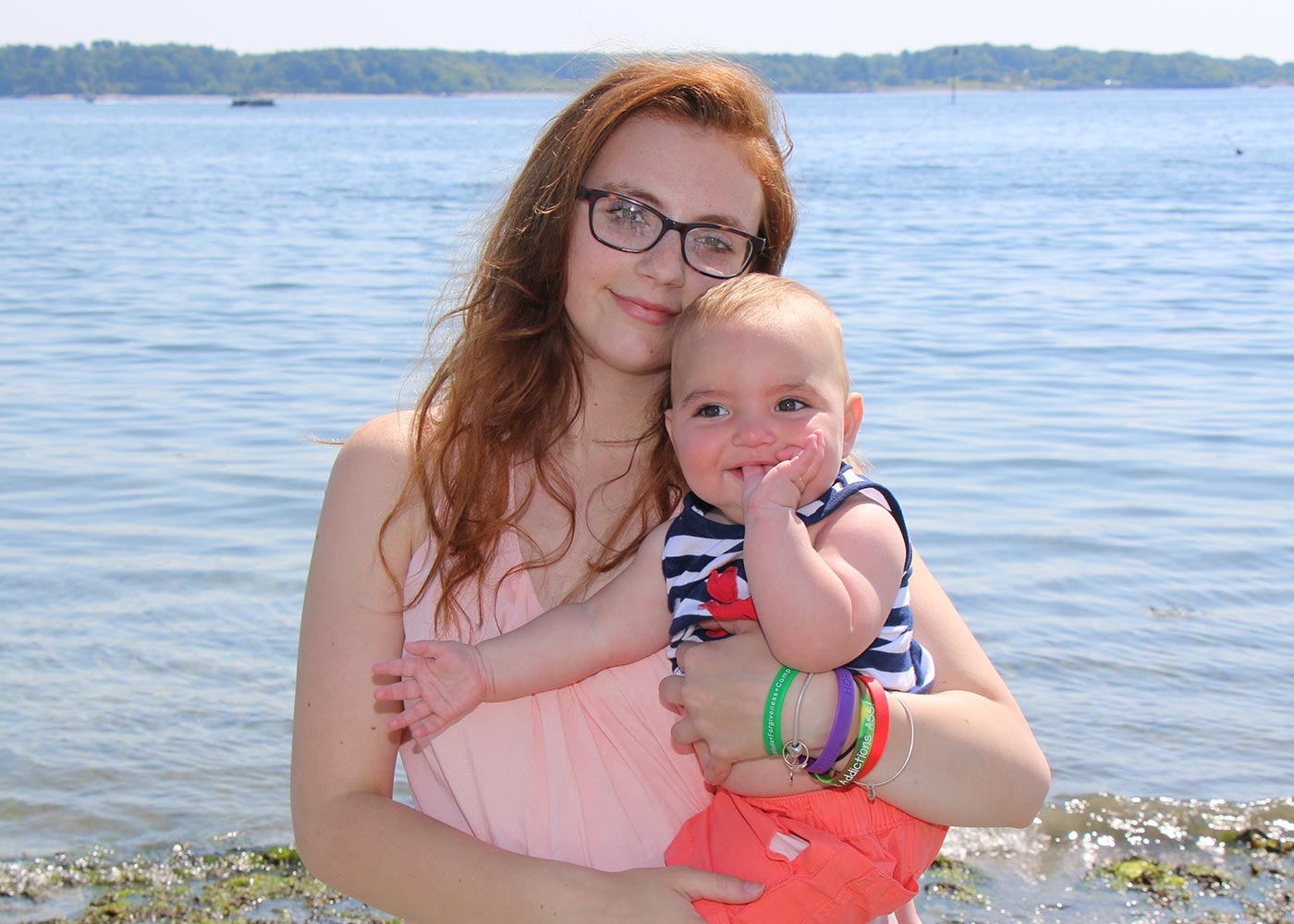 Based on the Seacoast in Greenland, New Generation becomes Catholic Charities NH’s first residential facility for women and children.